Atlanta, Cradle of the New South 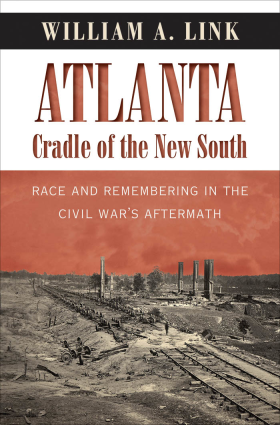 Race and Remembering in the Civil War’s Aftermath

After conquering Atlanta in the summer of 1864 and occupying it for two months, Union forces laid waste to the city in November. William T. Sherman’s invasion was a pivotal moment in the history of the South and Atlanta’s rebuilding over the following fifty years came to represent the contested meaning of the Civil War itself. The war’s aftermath brought contentious transition from Old South to New for whites and African Americans alike. Historian William Link argues that this struggle defined the broader meaning of the Civil War in the modern South, with no place embodying the region’s past and future more clearly than Atlanta.

Link frames the city as both exceptional–because of the incredible impact of the war there and the city’s phoenix-like postwar rise–and as a model for other southern cities. He shows how, in spite of the violent reimposition of white supremacy, freedpeople in Atlanta built a cultural, economic, and political center that helped to define black America.